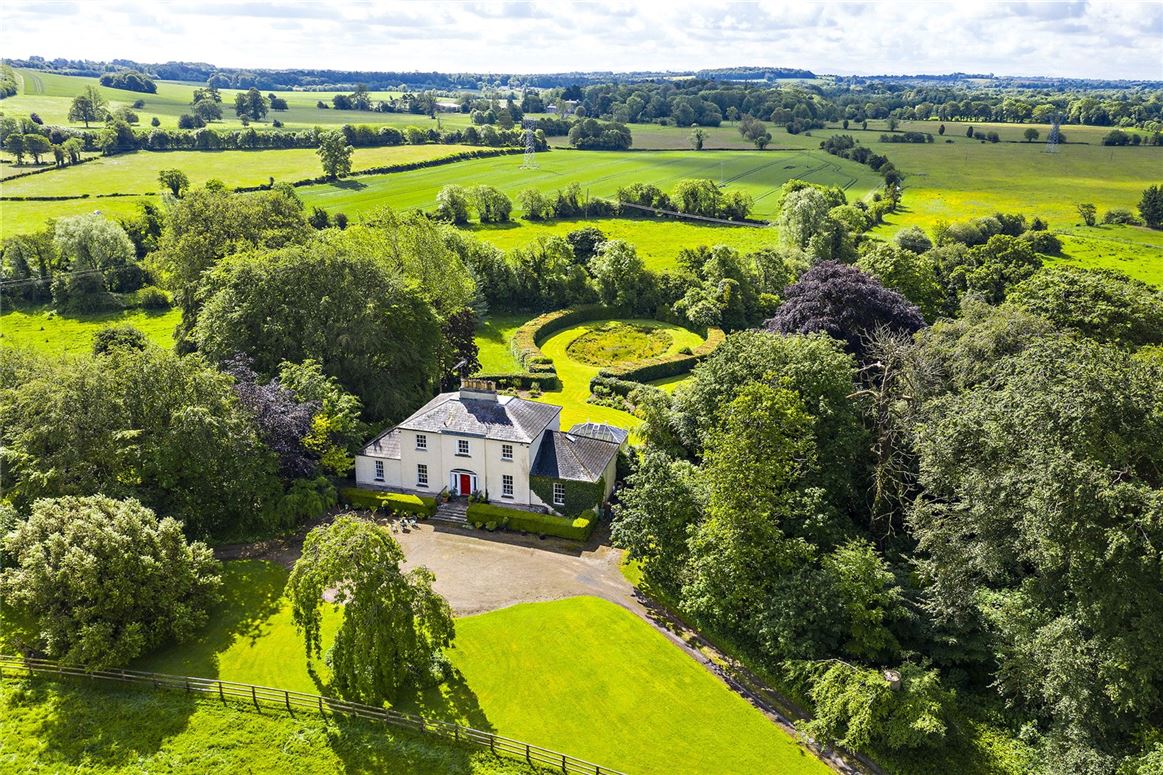 Charming period property from the early years of the 19th century on stunning mature grounds extending to about 10 acres on the village fringe. 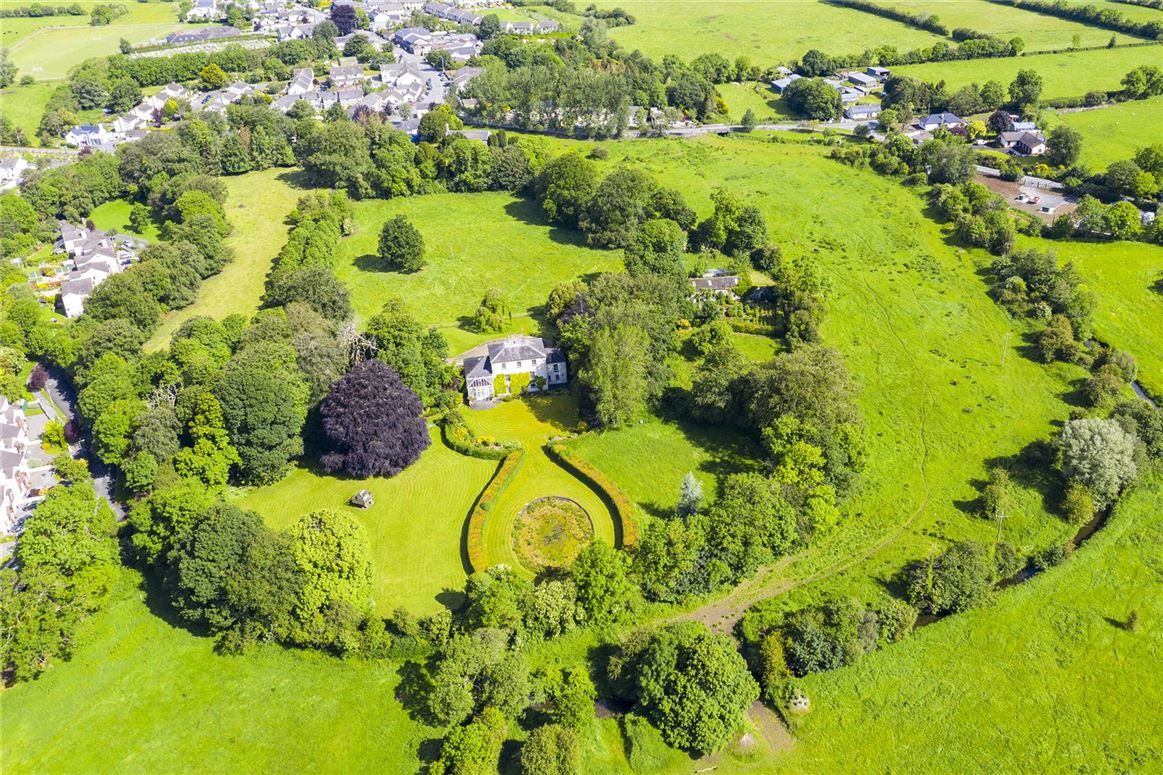 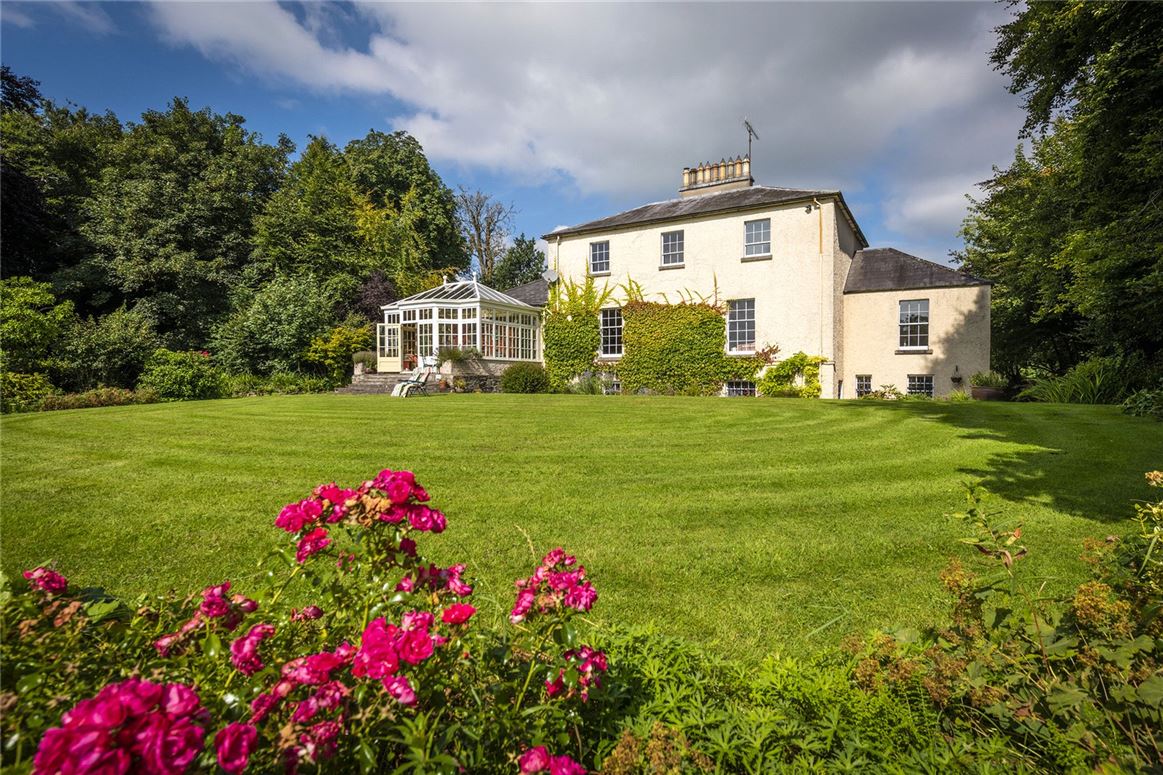 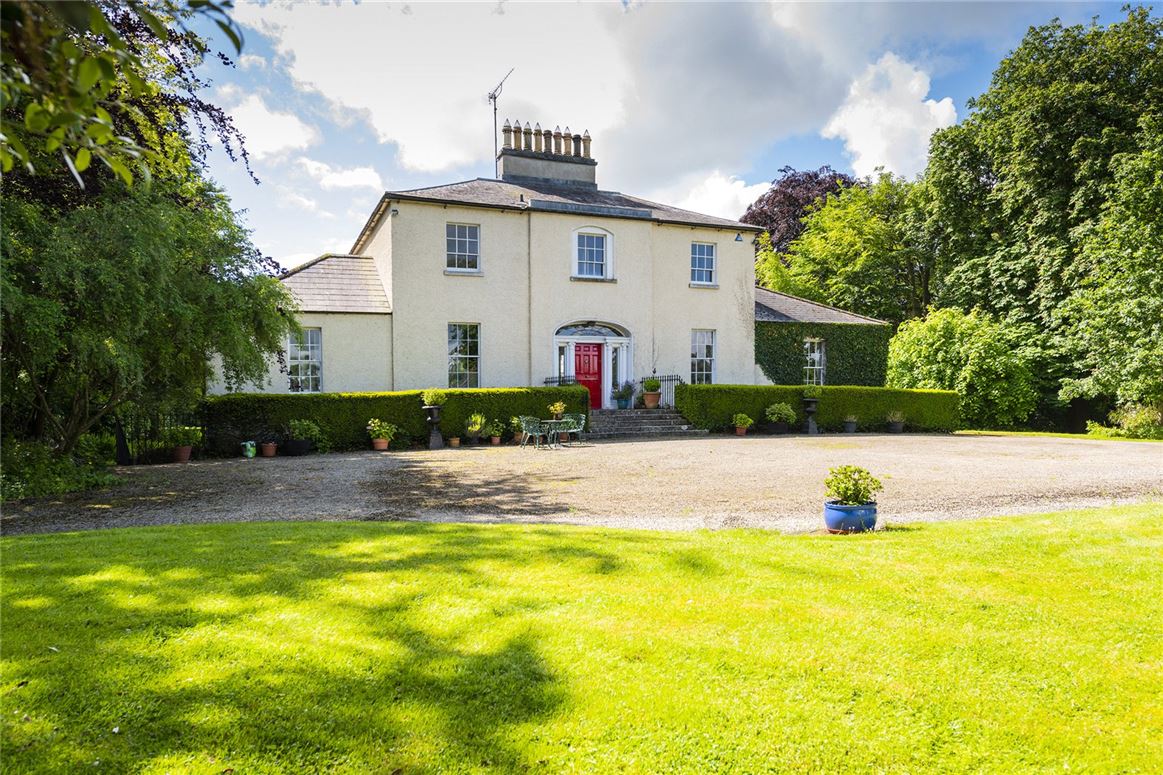 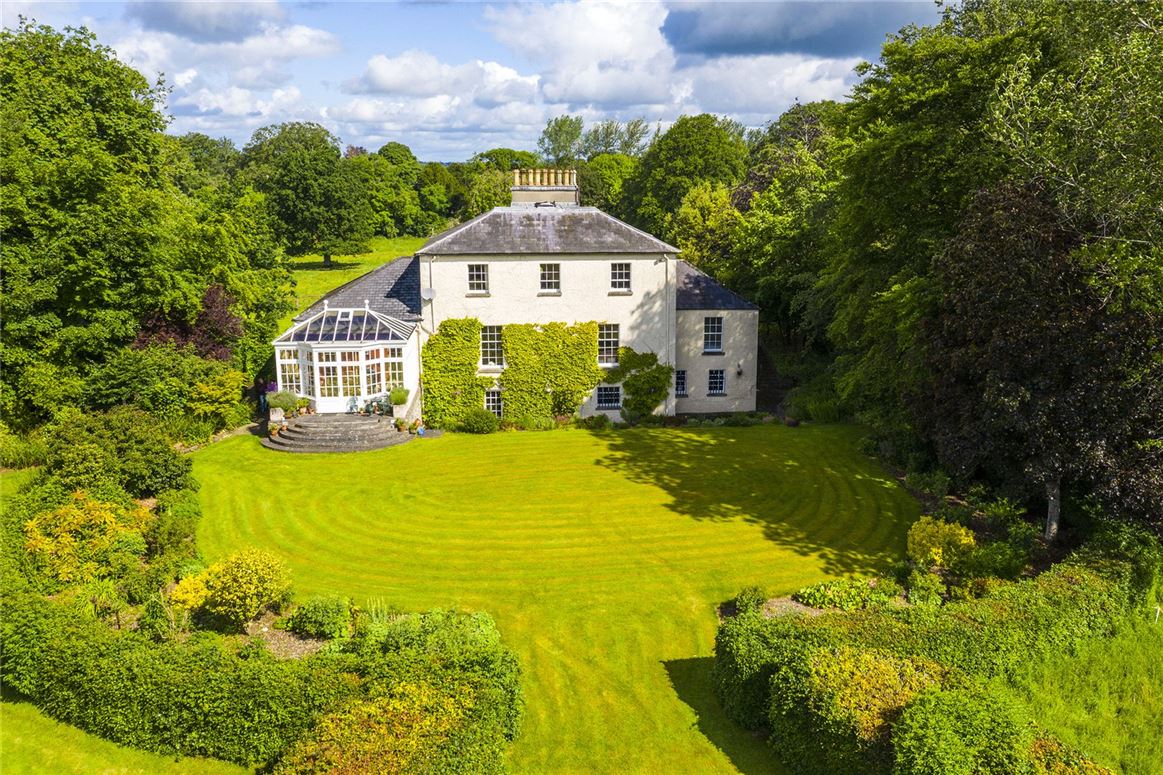 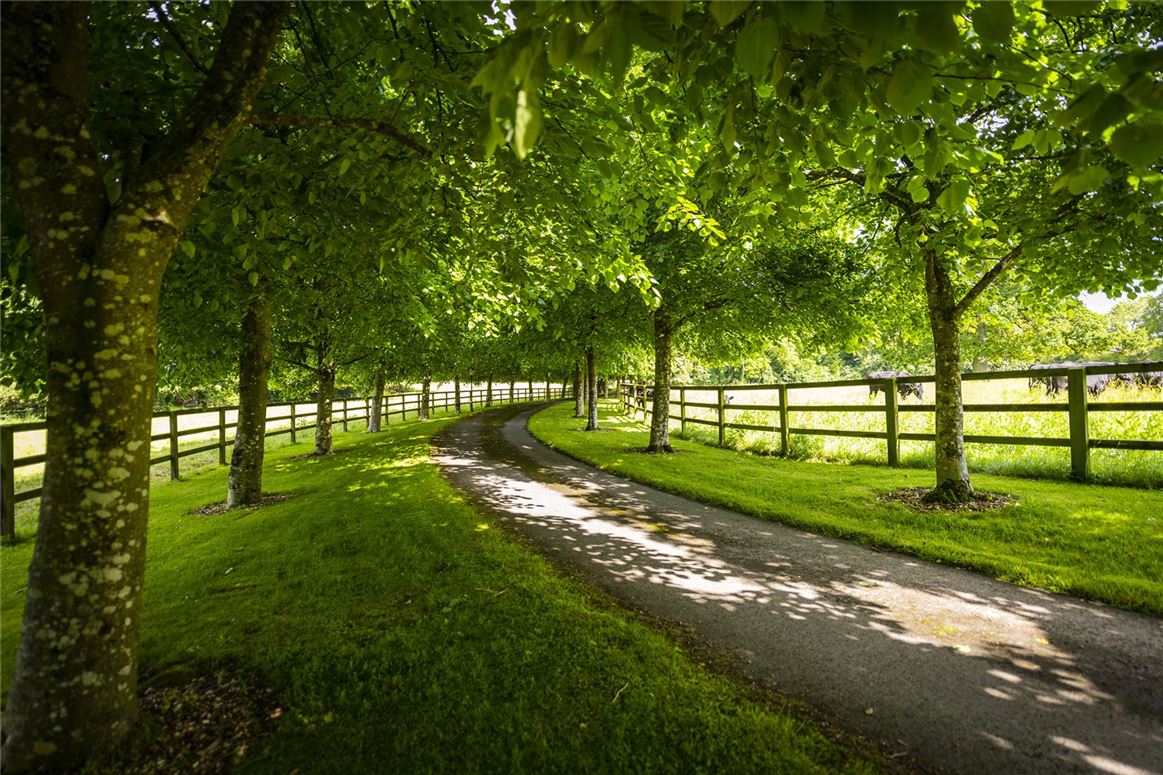 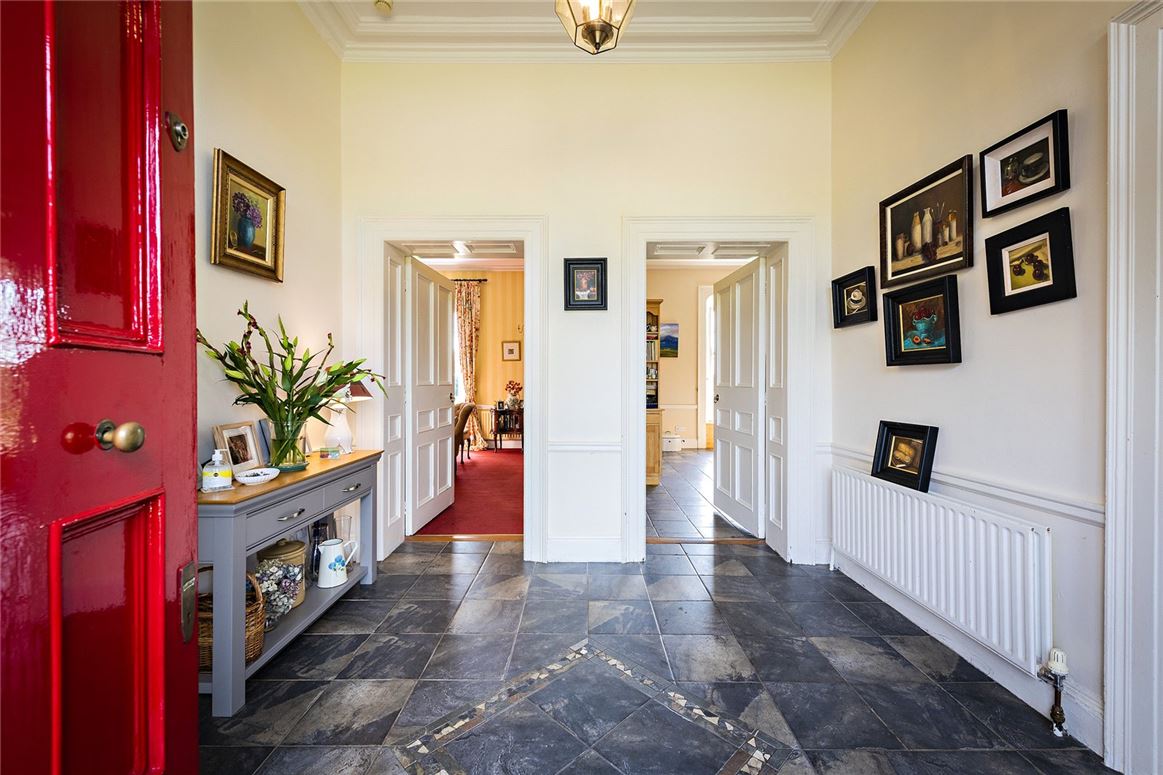 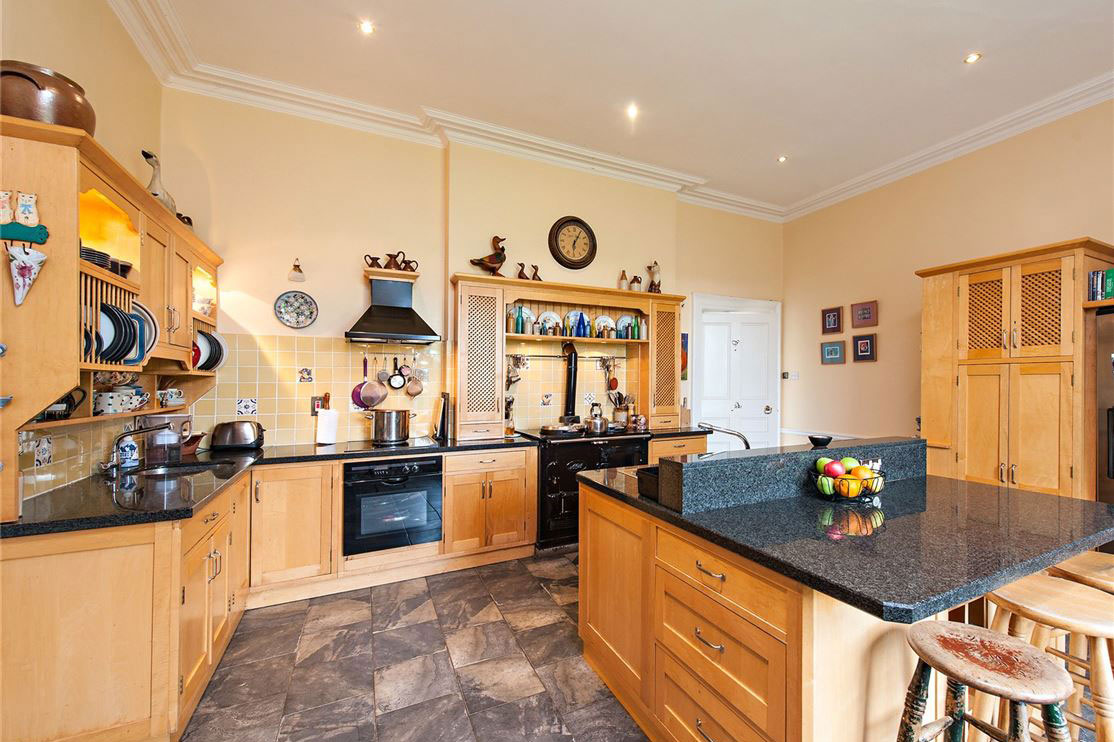 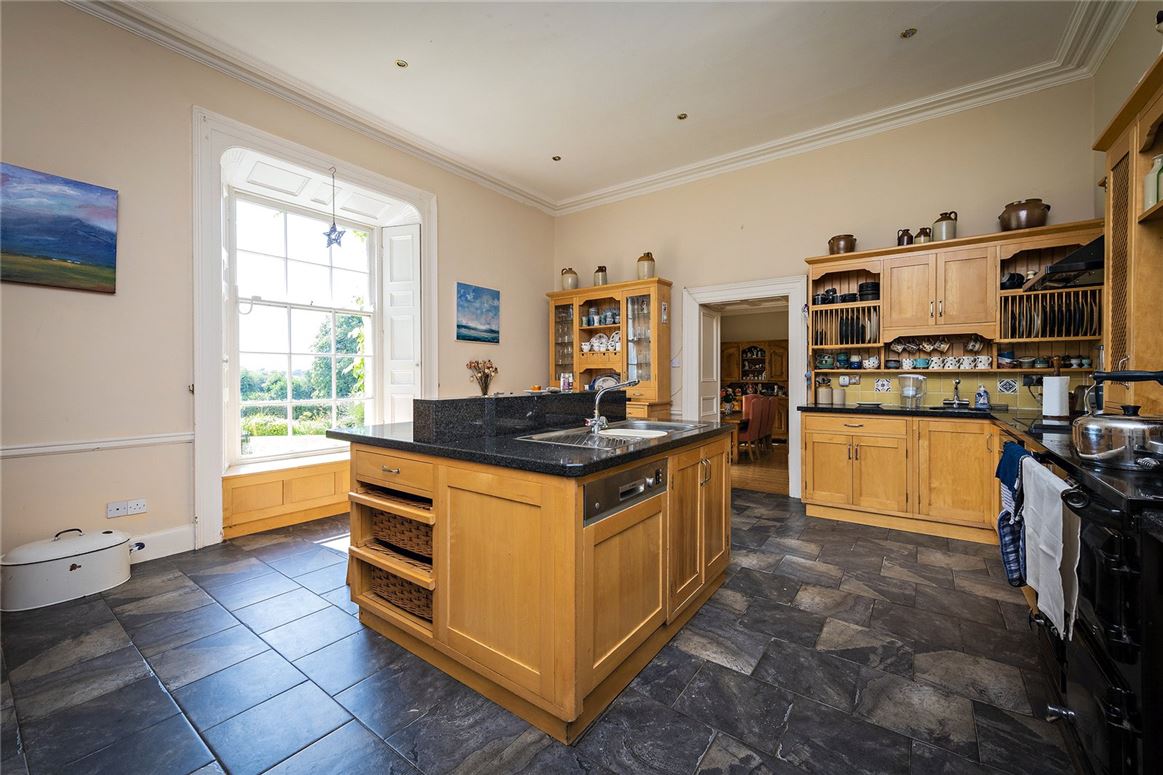 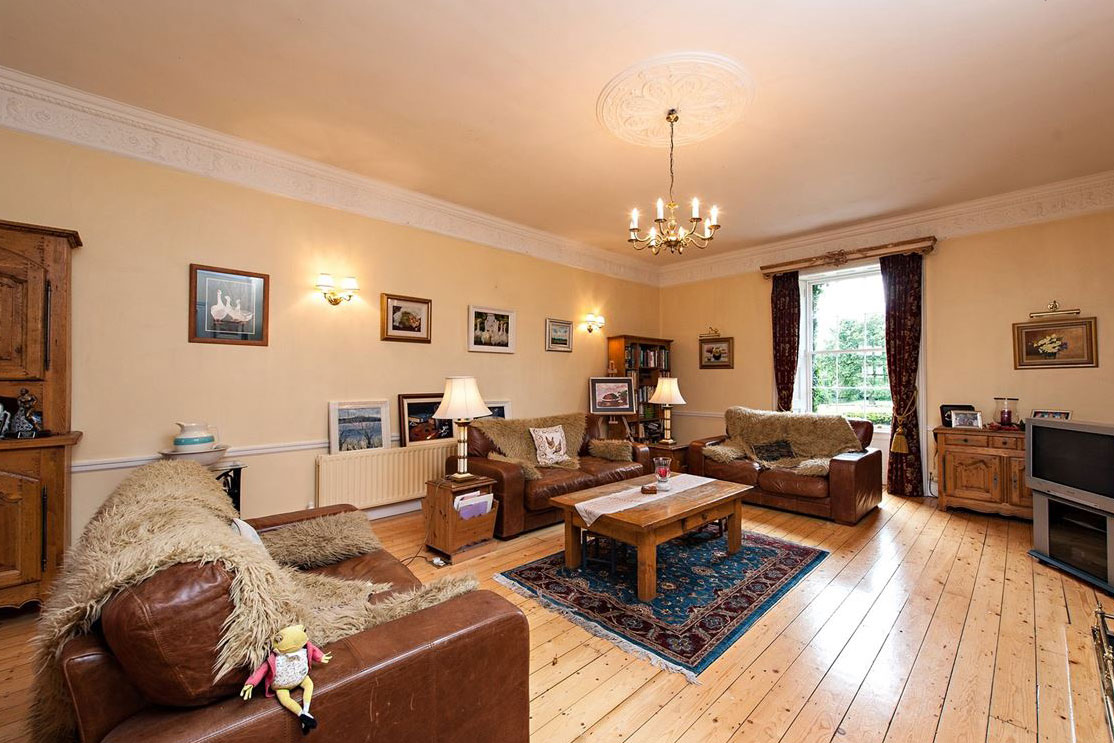 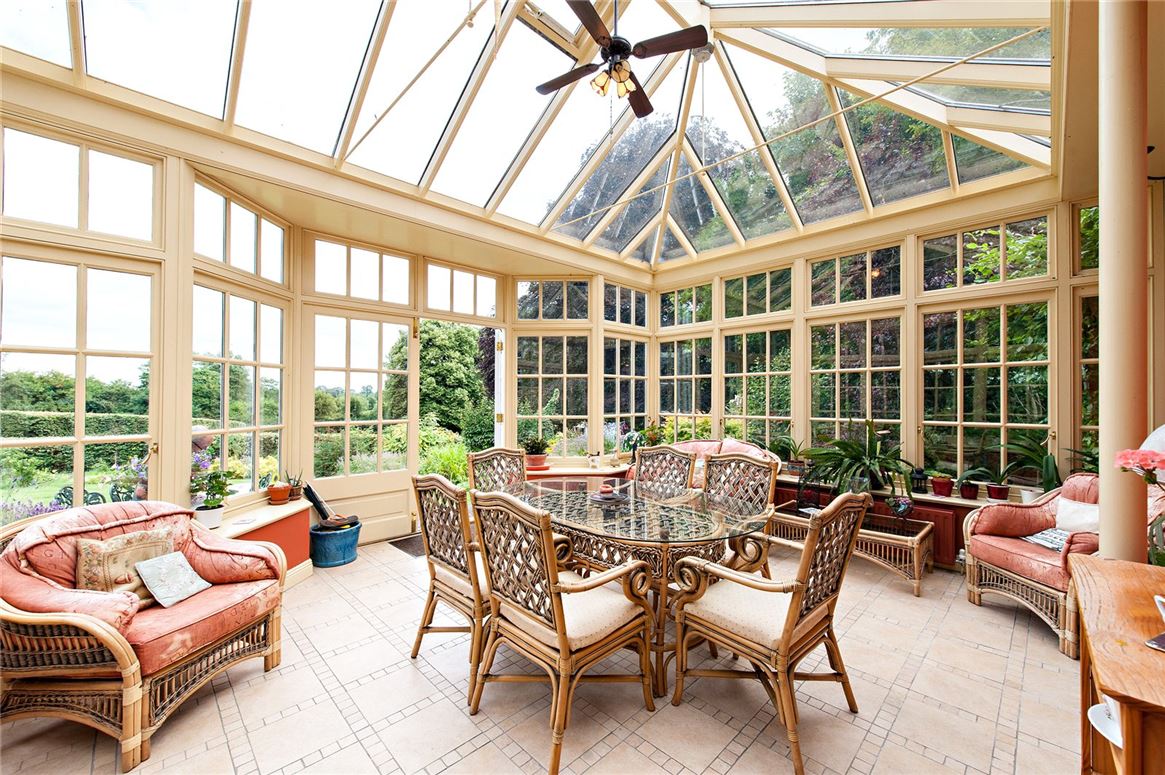 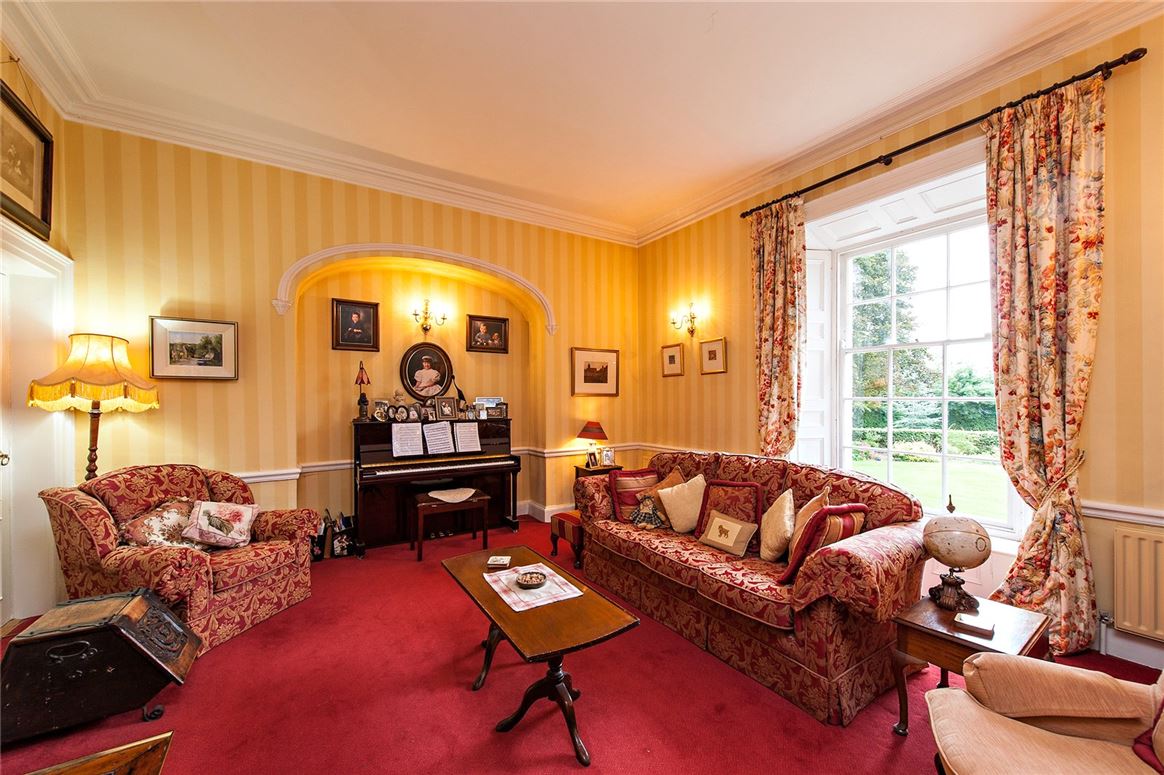 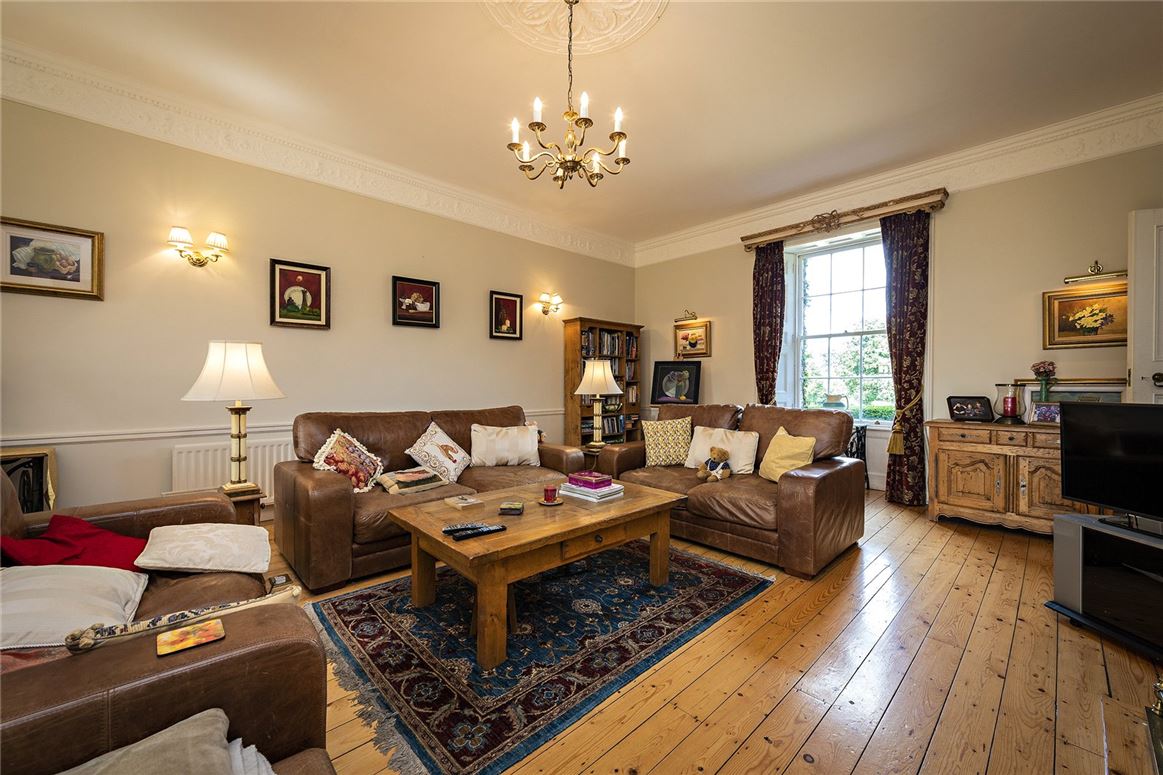 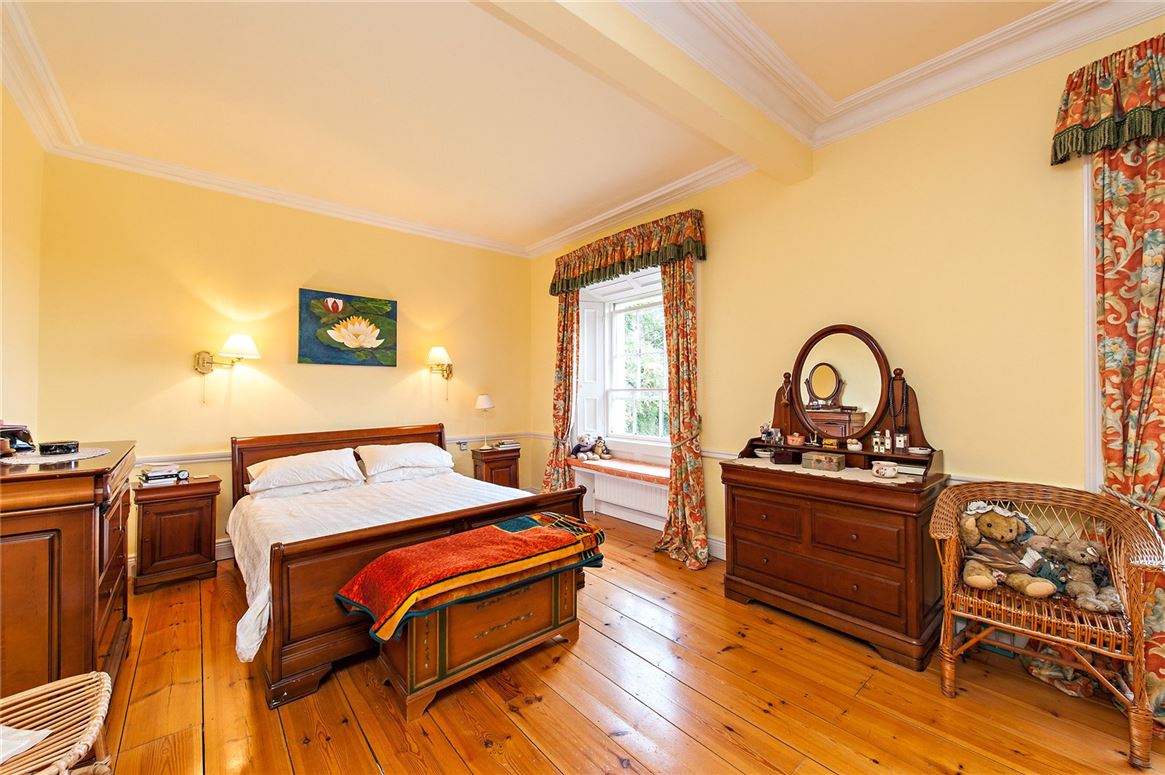 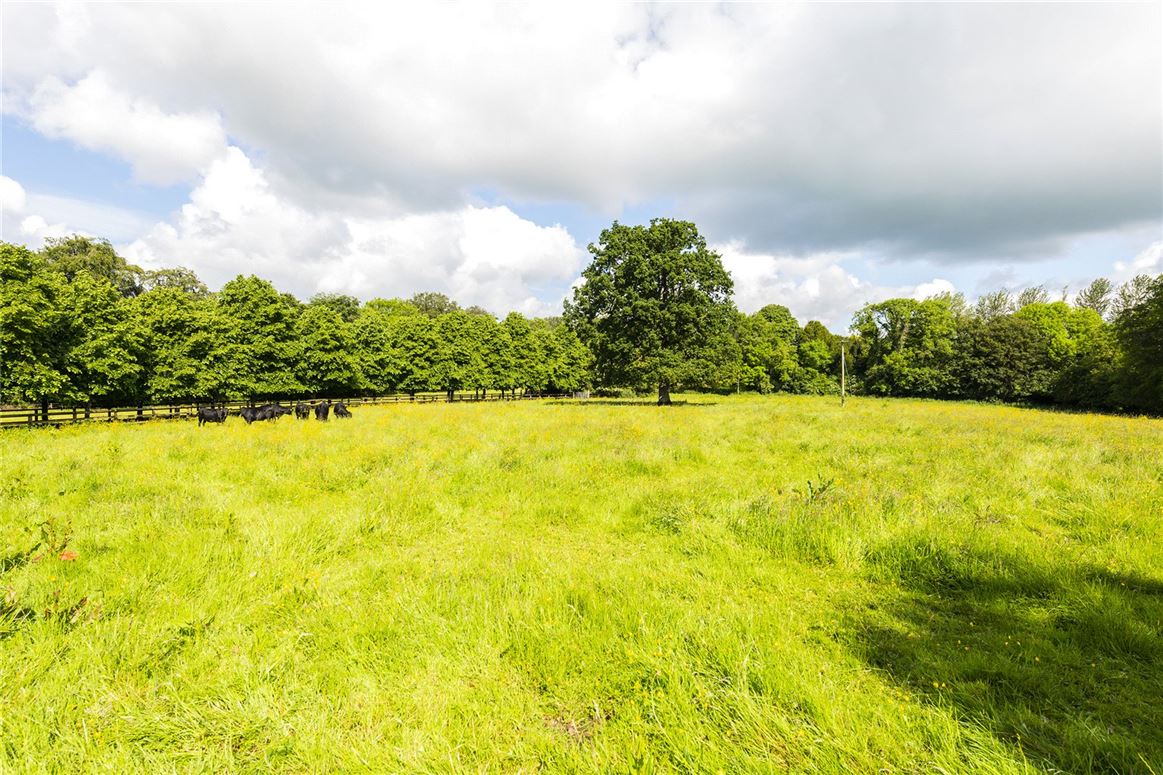 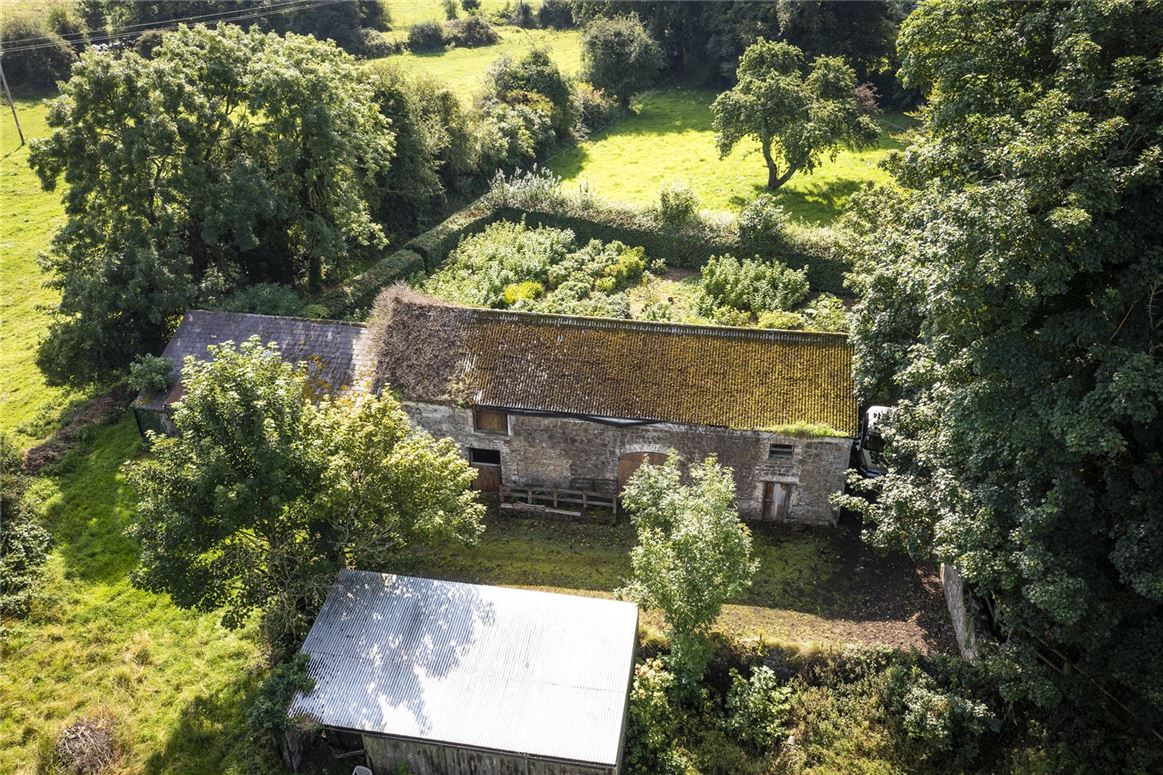 History
The Old Rectory dates from the early years of the 19th century. Architectural historians believe that it may have been designed by Francis Johnston, the architect whose most famous work is the GPO on Dublin’s O’Connell Street. The house originally comprised a central block with just the two storeys over basement. An east wing was added in the 1890s, while a symmetrical west wing was added in the 1980s.

The house was occupied by the local Church of Ireland Rector from the time it was first built until the middle of the last century. For most of that period it would not only have provided a home for the Rector and his family, but also their servants, who would have included a dairyman/gardener, a cook, a maid and, depending on the age of the children, a governess. Because of the dwindling congregation, Kilmessan parish was merged with the much larger parish of Trim in the late 1950s and the Rectory was sold by the Church of Ireland in 1958.

Description
The Old Rectory is a magnificent Georgian house, set on stunning mature grounds and extending to about 10 acres. Situated on the fringe of the popular village of Kilmessan, the property enjoys all of the amenities that the village has to offer. Being surrounded by beautiful mature trees offers a sense of privacy and security.

The house is approached through stone wall piers and iron gates which open to an attractive sweeping driveway, lined by stud railing and fabulous mature trees to the front of the property with ample parking. The Old Rectory is a three-bay, two-storey, over semi-basement house, beneath a hipped slated roof. The front entrance faces north, while the garden entrance faces south.

The exterior of the house includes prominent features such as roughcast rendered walls, timber sash windows with stone sills, a segmental arched doorcase and stone steps with cast-iron railings.

The light-filled accommodation is of generous and elegant proportions, as shown on the accompanying plans. Extending to about 4,789 sq ft (445 sq m), it is well laid out for family living and entertaining. The present owners have undertaken a programme of renovation and redecoration to create a family home with period features but suitable for modern-day living standards. Notable internal features include shutters, cornicing, vaulted ceilings, architraves, decorated fireplaces and ceiling roses. The kitchen is also fitted with an Aga cooker. A magnificent conservatory was added by the present owners and connects with an open plan sitting/drawing room which is the hub of the house.

Outbuildings
Situated to the side of the house is a former coach house of traditional construction. Extending to about 2,045 sq ft (190 sq m), planning permission was previously granted to develop a dwelling house. This permission has since lapsed, however, the footprint of the coach house is zoned residential.

Grounds
The house sits amidst wonderful mature gardens with many fine specimen trees and shrubs including a stunning mature copper beech tree which is a notable feature. The gardens are mainly laid to lawn and include magnificent flower beds, well-tended hedges, a fruit garden and pond.

Two paddocks are situated either side of the driveway which are fenced off by post and rail. Both paddocks can be accessed through gates off the driveway and provide grazing for livestock. There are also two smaller paddocks towards the back of the house and a number of wooded areas with a mixture of mature deciduous and coniferous trees.

Fixtures & Fittings
All fixtures and fittings are excluded from the sale including garden statuary, light fittings, and other removable fittings, although some items may be available by separate negotiation.

Historic Listing
The Old Rectory is listed on the record of protected structures, National Inventory of Architectural Heritage Reg No: 14329014.

Local Information
The Old Rectory is located in the heart of Royal Meath, in the charming village of Kilmessan which provides facilities such as a supermarket, pub, credit union, restaurant and primary school. Dunshaughlin and Trim (both 10km) are two bustling neighbouring towns just a short drive away with an abundance of quality restaurants, hotels, pubs, and a variety of boutiques and retail stores. Kilmessan is set in lush, green countryside and surrounded by rich farmland. It is close to attractions such as Bective Abbey, Killeen Castle and the hill of Tara which is the ancient home of the High Kings of Ireland, and the world-tombs of Newgrange.

As well as offering all the joys of true country living, The Old Rectory is just 39 km from Dublin City Centre and 42 km from Dublin Airport. A park and ride train service is available from the M3 Parkway (21 km), serving Dublin City hourly from early morning to late night. There is also a regular bus service to Dublin from the village operated by Bus Eireann.

County Meath has a proud sporting history and can offer a wide variety of quality sporting and recreational activities for even themost active of lifestyles. The golf enthusiast is well catered for in the surrounding area with quality golf courses within a few minutes’ drive. The nearby golf courses are Royal Tara Golf Club (5 km), the famous Jack Nicklaus designed golf course at Killeen Castle (7 km), and Knightsbrook Golf Club (10 km). The championship course at Carton House is only 29 km away and played host to the 2013 Irish Open, as well as the 2018 World Amateur Team Championships.

Race-goers are well catered for with Navan Racecourse (17 km) and Fairyhouse Race Course (17 km) nearby. Both of these courses are renowned and host a multitude of events throughout the year.

There are a number of primary schools in the locality, with secondary education available in Trim, Dunshaughlin and Navan.