The Listing of Love’s Labours

Brian O’Connell from The Irish Times wrote an article on restoring listed buildings for the Weekend Review Supplement. 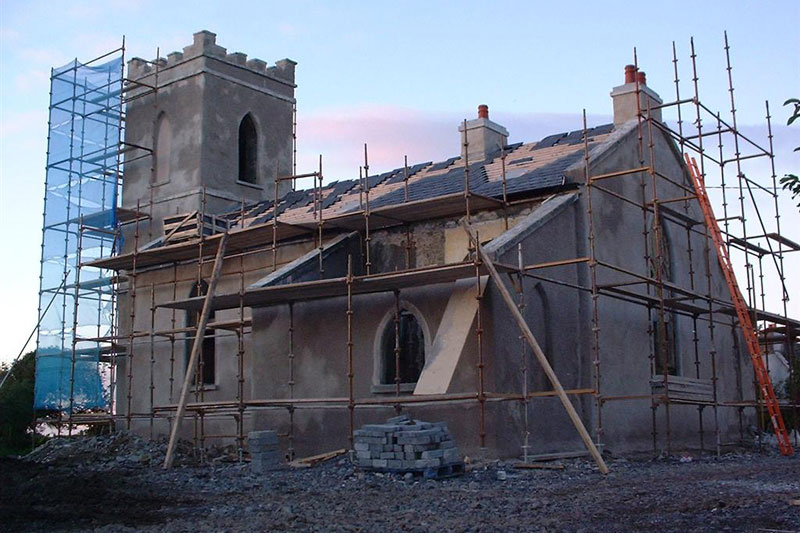 Buying a listed building and restoring it as a home could seem like an ideal enterprise to many people, but the reality is they need massive amounts of time, effort and help, writes Brian O’Connell.

For many property romantics, the dream of owning a listed building can quickly turn into a financial and logistical nightmare. To borrow from the novelist, listed buildings are becoming something everyone wants to have bought, but nobody really wants to buy.

Take Chris Deakin for example. A few years back, Chris and his partner, Orla McCluskey, stumbled across their dream home in the property pages of a newspaper. The building, an old disused church in the Galway countryside, had never been lived in and caught the couple’s imagination. Up to that point the couple had lived in a 1970s bungalow, which they extensively refurbished. The decorating bug well and truly bit, and they set their sights on the 200-year-old building 7 miles from Athenry.

Three years on, and the couple has yet to move into their dream home. Deakin explains some of the reasons for the long delay: “Firstly it took us a while to get the money together to buy the building,” he says. “We went to several banks and none would give us a mortgage. At the time the banks were more interested in safer bets, even though we had a valuation from the auctioneers which said the property would be worth a hell of a lot more once we renovated it. I think the difference would have been somewhere in the region of €200,000. Buying a listed building is not like buying any other type of family home though.”

Strictly speaking, listed properties, or protected structures as the Heritage Council refers to them, are structures which a planning authority considers to be of special interest from an architectural, historical, archaeological, artistic, cultural, scientific, social, or technical point of view. Every planning authority in the country is required to keep an inventory of listed buildings, or Record of Protected Structures (RPS). Any member of the public can recommend a building for protection, but the decision to include structures in the RPS can only be made by the elected members of the planning authority.

Owners of protected buildings are under certain obligations to ensure no aspect of them is endangered through harm, decay or damage. If you are considering carrying out refurbishments to one, then more stringent planning laws apply which planning authorities can advise you about. It’s worth checking what redevelopments will be allowed on your property with the planning authority before you buy, as certain works that are normally considered exempted development may require planning permission on a protected structure.

“When we first went to look at the church, we brought an architect with us who had knowledge of the building and what would be permissible,” says Deakin, “so we knew exactly what we could do with it. We had assumed because the building was listed that we couldn’t do anything to the outside. But we were allowed put on a small extension and add a third fireplace. So the authorities are reasonably flexible, once you are maintaining the integrity of the property. We eventually got a mortgage from a bank but it took some perseverance, because it fell outside the normal mortgage criteria.”

Having to source expertise and materials added to the renovation process for the couple, who had sold their family home and moved into rented accommodation. The end is near, though. “The electricity was connected yesterday and we have the kitchen coming next week. We had to replace the windows, and sourcing the material set us back six months. I would hope to start painting the week after that. Hopefully we are close to moving in, but I have been saying that for a long time!”

The couple have decided to share their experience with other owners of listed buildings, and set up a website, www.formerglory.ie, where listed buildings for sale can be advertised. “I found it difficult to find estate agents who dealt solely in listed properties. You’d get the odd building here and there,” says Deakin, “so our idea was to set up a website where all these buildings for sale could be grouped together. I’ve been a DJ for 15 years and am now thinking of running the website full time, so the potential negative in waiting three years to move into our dream home may yet turn into a positive.”

COLM MURRAY, architecture officer with the Heritage Council, knows first hand the challenges involved in buying a listed building. Five years ago, he bought an early 20th century arts and crafts style property in Kilkenny and carried out extensive renovations.

“We didn’t have any real problems with the building, but then again as an architect I could apply my own expertise. There were some silly legal issues to do with the estate which delayed the sale by a year, but that gave us time to think about how we were going to upgrade the property. It’s worth bearing in mind that when you buy a protected building, your solicitor should flag the protected status. You shouldn’t be buying a house and discovering after the sale that it has a protected status – that should be avoided,” he says.

Murray lists the character of his own home as one of its most endearing attributes. The downside is the draughty nature of the property, which often requires the occupants to wear an extra layer of clothing. “A big challenge coming up for these buildings are the new energy rating guidelines set out by the Government. Each building will be required to have an ‘eco label’, setting out its carbon footprint. Owners will then be told how to improve the performance of a building. The great worry is that the scheme will not be tailored to the needs of older properties that often perform differently to modern ones. It’s a major challenge ahead and we are awaiting guidance from the Department of Environment on it.”

Murray says potential purchasers of protected buildings should always request the local authority to issue a declaration which will indicate the types of works that could be carried out without affecting the character of the structure. These works would not require planning permission and a local authority would, in general, issue such a declaration within three months of receiving a request. “I know this will not make me popular with planners and conservation officers, but it’s the law and is not always requested in Ireland. If you request a declaration and the planning authority say your rights are restricted, they have to tell you precisely how. For instance, they might say they have no interest in retaining a 1950s extension, so before you buy a property you know exactly what you can do without incurring the wrath of the planning authority.”

While Murray says there shouldn’t be too many issues in terms of obtaining a mortgage, difficulties can arise when it comes to insuring listed buildings, especially ones with thatched roofs. Specialist insurers are available in the UK though, and some in Ireland, such as FBD, do have a policy for specialist buildings.

“The other issue that I have seen come up has to do with engineers’ reports. There may be engineers who are a bit thrown by old buildings and the way they have moved. Old buildings creak and shift; it’s a fact of life. An experienced engineer will try and figure out how much the building moves and whether this is normal behaviour for an older building. Sometimes, engineers get alarmed about things they don’t need to be alarmed about.”

Whatever difficulties are involved in buying a protected building do not seem to act as too major a deterrent, he believes. He points to the continued popularity of owning older buildings, and the status they often give the owner.

“A colleague of mine often remarks that you only have to look at large swathes of south Dublin, where people have bought into the status of protected buildings en masse over the last decade. Across many parts of affluent Dublin the process of buying a protected building would appear to be working smoothly. But nationally, perhaps, this is true to a lesser extent.”

In terms of policy, Murray says that conservation alone is not the way forward and that perhaps relevancy is the key word. “We in the Heritage Council are always advocating minimal intervention to these properties. The word ‘restoration’ strikes terror onto our hearts. Restoring a building to its former glory may not be the best course of action. You should not feel a major obligation to return these buildings to their original state – they need to tell their age and feel comfortable in their usage. The important thing is that these buildings continue to be used and enjoyed by people.”